Today was an even earlier start than yesterday.  We began by going to nearby Troy.  Huseyin told us how a German archaeologist destroyed the Troy of Homer’s Iliad because he believed it would be found in the lower layers of the site but, in fact, it was much nearer to the top.  There is a replica wooden horse that you can climb inside and have your photo taken.  There is also a chariot and gladiator costumes in which you can dress for a photograph that will cost you 10 TL.  I must admit to being underwhelmed.  I bought a tiny wooden horse and we got to watch the Brad Pitt movie ‘Troy’ on the bus. 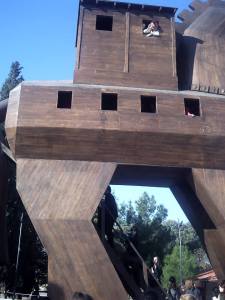 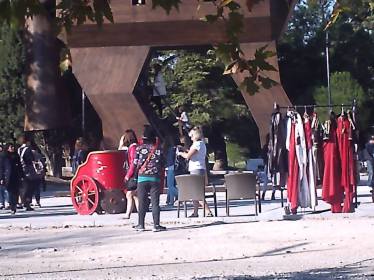 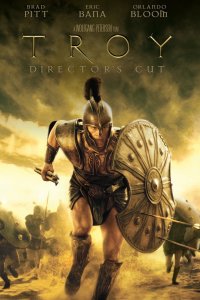 After approximately 4 hours , we arrived in Bergama where we visited the ruins of the Pergamum Acropolis.  The library of Pergamum was second only to the library in Alexandria.  Pergamum was a Greek city and, in its heyday, it was home to about 200,000 people.

Our home for the next two nights was the Grand Onder Otel (this is not a spelling error, this is the Turkish spelling) in the port city of Kusadasi on the Turkish Aegean coast . This hotel ranked 64 out of 157 on Trip Advisor and has since changed its name to the Suhan Seaport Hotel.

A lot of cruise ships stop in Kusadasi and offer day trips to Ephesus which was our destination for Day Five.  In the evening we strolled the streets along the port stopping at a cafe where some of our group tried shisha, the molasses-based tobacco concoction smoked in a hookah pipe.

View all posts by andreabrandle